She has been called a civic leader, a philanthropist, businesswoman, patron of the arts and devoted to preserving the Armenian culture. 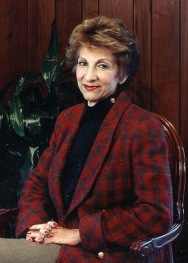 Louise Manoogian Simone, daughter of the late Alex and Marie Manoogian has passed away at the age of 85. Her father was the inventor of the Delta faucet and led Masco for several years. The Manoogian name and their contributions will live on for decades. The list of accomplishments and how they helped both the Armenian and American community is endless.

Simone followed in her father’s footsteps by leading the Armenian General Benevolent Union (AGBU) for several decades. Retiring from the AGBU in 2002, her involvement in the organization has left an indelible mark on the Armenian community.

I never personally met Ms. Simone, but I was on a recipient of her generosity over the years. When Andrew Goldberg produced the documentary “The Armenian Americans”, she contributed significant funds to make the documentary a reality. She flew myself and few Armenian musician Dick Barsamian out to New York to film us perform Armenian music for the documentary. The second time was when I produced the CD: George Mgrdichian, American Oud Master. Simone was very selective in the books and musical selections she would feature in her AGBU magazine. She was an avid fan of George’s playing and was more than happy to help sell copies of the CD in her bookstore.

Simone was also a great benefactor to American Universities, Museums and cultural institutions, including the University of Michigan, Wayne State University and the Detroit Institute of Arts. She received many honors throughout her life, among them the Ellis Island Medal Of Honor.

She is survived by a brother, three children and two grandchildren.