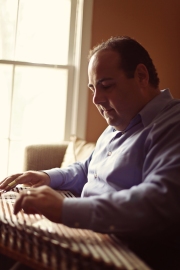 Ara Topouzian is an Armenian-American musician whose proficiency at the kanun (Middle Eastern harp) has made him a nationally-recognized artist.

He has performed in concert, at music festivals and many celebrated venues across the United States, with the top musicians in Middle Eastern music.

Topouzian’s traditional musical style keeps to his Armenian heritage but has expanded to include music from around the Middle East, as well as jazz, fusion, new age and blues.

The recipient of numerous awards, Ara Topouzian’s music has been heard and sold around the globe.

In 2012, Topouzian became an Kresge Artist Fellowship, awarded by: Kresge Arts of Detroit, a program of the Kresge Foundation. In 2013, Topouzian won a Knight Arts Challenge from the Knight Foundation.