When did you first discover the arts?

Over a month ago, I was sitting in a board of directors retreat (Creative Many Michigan) when the question was asked of each of us – when did you discover the arts? Such a simplistic question you would think, but for me it gave me pause for several reasons.

As children we all played with arts and crafts. I can recall finger painting was a big thing when I was a child, even to the point that if I were to smell a jar of finger paint, my brain grabs that memory from when I was a child to remind me. However, did I discover the arts back then? Using crayons, listening to music, dancing, acting in plays — when is our big-bang theory as it pertains to art discovery? 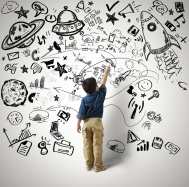 For me, I wouldn’t be able to pin-point the exact day or form in which I discovered art, but I do know I was a child. It involved a multitude of forms of art and culture and I explored many different types growing up. As a musician people ask “how”, “when” “where” as it pertains to ones learning. The answer for me is not as simple. Sure, I can tell you that I listened and watched musicians and they were inspirations to me wanting to play music, but I think the interest in music stemmed from other cultural/art forms.

As a child, I often pretended to be Charlie Chaplin.

Having an imagination is what I feel is our first discovery of art. As children, we all imagined. Some of us had imaginary friends, others imagined plot lines, stories or other activities that would involve imagination. To be creative is the ability to allow our mind to be open in producing a “something” that can be outwardly projected.

My discovery involved this imagination. In its roughest form, I always pretended I was in an old movie. I love old movies to this day and whenever I would watch the old classic comedy or horror movies, I would often want to imitate them and create my own plot line. As I grew older, how I used this imagination morphed into different arenas, one of them, and most prominently is music.

Ask yourself when you think you first discovered the arts? Give it some thought, you might be amazed and what you remember from childhood.

1 Response to When did you first discover the arts?