Multiple tasks need to be accomplished for this project to stay on track and be completed in 2014. Sure, the fundraising is important, but the content is what will make this film. To date, I have interviewed several musicians and have some rich history to show all of you in this film. The most adventurous part of this project has to be collecting old photographs and other memorabilia that shows the audience what the music scene in Detroit was all about for the Armenians. 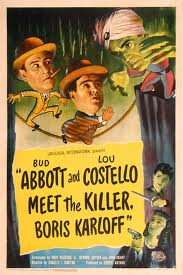 This is 27×41 original poster from the film Abbott & Costello Meet the Killer, Boris Karloff (1949)

It reminds me of when I was a teenager collecting old movie memorabilia. I was an avid collector of old posters, lobby cards and 8×10 movie stills from the 1940s, mainly from the Abbott & Costello movies (see the image on the left as an example). Before the Internet, these were difficult to obtain and you had to write letters, call people and visit estate sales. It was a lot of fun for me and I was always amazed by the art quality of the design of these movie posters. Collecting the vintage photos of Armenian musicians and old memorabilia from the nightclubs gives me the same enjoyment.

Finding these photos or documents are no easy task. As it has been explained to me a few times – cameras were not easily found back in the 40s-50s and when they would go to a “club” to listen to music — a camera was not part of their accessory. We take that for granted because everyone is carrying a phone that has a camera on it! When I do come across a vintage photo..I treat it like gold and care for it. I scan it and promptly return it to the owner.

If you have any of these types of vintage memorabilia, I urge you to make contact with me via atopouzian@gmail.com and let me know what I might borrow and scan to use in the film.