Tired of the Silence 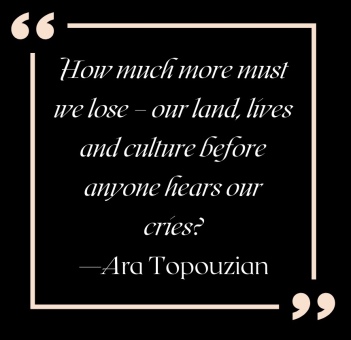 I will make this short.

As the title of this post suggests, I, along with every Armenian, is tired of the ongoing silence that resonates over the treatment of our people by the Turkish government.

In the early hours of September 13th, Azerbaijani troops struck once again with a major military assault on the Armenians around 200 kilometers from the cease-fire border in the Republic of Armenia. By the end of this assault, 200 Armenian soldiers were killed and over 7000 Armenian residents displaced. Azeri troops advanced on Armenian soil. All in a matter of hours.

Armenian were attacked less than two years ago ending with a cease-fire which was established. This latest attack is the deadliest since the 2020 attacks and once again, Azeri troops once again broke that peace and where is the rest of the world stand while our people get attacked? Silence.

Without stepping too far into politics with this blog, as an Armenian, I am disgusted that more isn’t done to help our brothers and sisters in Armenia. When is enough going to be enough and our world leaders speak up and stand up for Armenia? When will there be reparations for the brutal killings that have occurred?

How much more must we lose – our land, lives and culture before anyone hears our cries?

This entry was posted in Armenian, armenian genocide, Artsakh, Genocide. Bookmark the permalink.

2 Responses to Tired of the Silence