An Open Letter to Film Critics about The Promise 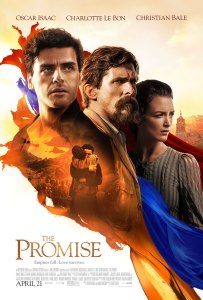 Since its release on April 21st, much has been written and commented about the major motion picture, The Promise. Articles describing the making of the film and its importance have been well documented and favorable, however my disappointment and reason for this open letter concerns several of your reviews on the film.

Lets start with Internet Movie Database (IMDB) even though these are non-film critic reviews. I believe they set the tone for the rest of my letter. Realizing this type of forum, IMDB has increasingly become an untrusted source for real reviews due to fraudulent ratings and reviews movies printed BEFORE an actual release date. The Promise proved to be a victim of the same tactics. Internet trolls and several Turkish message boards flooded IMDB with poor reviews and 1 start ratings weeks before the film was release. This widely known issue has been covered by CBS News,  The Sydney Morning Herald, and many others.

Moving on to more reputable news sources, let me address the Associated Press which said:

“…But despite the best of intentions, the film fails to properly explain and contextualize both what led to that disgraceful episode, which Turkey to this day denies, and why it escalated as it did”.

I take issue with this comment as I disagree that The Promise failed to portray the atrocities. As a matter of fact, it hits all of the points and still provides the cinematic flare of several major motion pictures depicting similar atrocities to humankind. This movie gives the viewer enough information to provide a picture of what occurred during the Genocide  – without the gore and violence we are accustomed at the movies. It doesn’t need to show every gory detail of the reality our grandparents faced over a hundred years ago.

If you are expecting a type of monologue at the beginning – rent a documentary about the Armenian Genocide, as there are many  well produced films available. I would recommend watching The Armenian Genocide (produced by Andrew Goldberg) or Orphans of the Genocide (produced by Bared Maronian). However, The Promise was created for specific reasons and big monetary returns was not one of them. It contains an important message and anyone that saw the film understood that.

Several of you have also indicated that you understand the importance of the Armenian Genocide and that it is a subject everyone should be made aware of while giving it a thumbs down of approval. This approach seems counterproductive.  Do you think providing negative feedback about such an important topic sheds light on the Armenian Genocide or are you just encouraging people to stay away?

This is the first time that a major motion picture depicting the Armenian Genocide received major funding ($100 million), A-List actors, wide distribution (2000+ screens in the USA) and a massive brand awareness. But yet, your answer is to say that it wasn’t “good enough” and therefore this is supposed to encourage viewers not to watch the film.

In my opinion, The Promise receives high marks in several areas which are expressed in the film:

I suspect that as film critics, you were expecting Shlinder’s List or perhaps Judgement in Nuremberg. In some ways, that would be great, but the big difference is that the underlined stories did not have to educate an audience. The Jewish Holocaust is widely accepted by not only the United Stated but Germany. The Armenians have not been afforded such a designation to date.  How do you tell a complex story about the Armenian Genocide to the masses that sadly know little about the Armenian Genocide?

The Washington Post can not even refer to the massacres as Genocide, instead says “what the film presents as the murder of 1.5 million Armenians…” I guess being that close to the nations capital has rubbed off on continuing to deny that the massacres were a Genocide.

Luckily, not all of your colleagues shared your negativity, such as:

Despite your attempts to give this film a bad review, I hope the world sees past them and goes to the movie anyway. As one friend recently told me: “Whenever I read a bad review, I go out of my way more so to see the film because I know they got it wrong”.