If you are an Armenian, Greek, Arab or other ethnicity type musician living in the United States and you have played the oud (Middle Eastern lute), the name Peter Kyvelos is someone you know.

Peter Kyvelos in his shop in Belmont, MA. (photo: National Endowment of the Arts)

Peter is a luthier and by definition a luthier (a French word from the root luth meaning lute) is someone who builds or repairs string instruments generally consisting of a neck and a sound box. This general description doesn’t even begin to capture the artistry of Peter Kyvelos. Simply put – his ouds are some of the finest craftsmanship in the world.

In 1989, Peter received one of the highest honors bestowed onto an artist in the United States – the National Endowment of the Arts Heritage Fellowship, an honor that recognizing an artists excellence and their continuing contribution to their traditional arts heritage.

Over the years, Peter has made close to 200 different ouds. The sound is superior and as any fine oudist will tell you – they can pick out a Kyvelos oud by his distinctive sound, craftsmanship and rosette designs.

Along with his work ouds, Peter has made a career out of making and repairing other stringed instruments, mainly at his shop located in Belmont, Massachusetts.

His shop, after decades of work, recently closed and as his son Nick posted a warm tribute to his father’s store on Facebook:

“After tonight 165 Belmont St will no longer be in our care. It took 7 16ft box trucks to empty out the contents of my dad’s 45 years of work. It may not look like much but this small shop served as a musical instrument store, repair shop, coffee-house, smoke shop, advice place, you name it and dad could/ would do it here. It was and will always be my favorite place! I have been receiving calls and emails lot of old stories about “the shop” all wonderful and make me very happy to see all dad accomplished down there”.

In reading the above quote, I began to reminisce about Peter’s shop and all of the musicians that have stopped at his shop over the many years. I fondly remember the first time I visited Peter’s shop, it was over twenty-five years ago and I was looking for my first kanun and was told Peter had one for sale. My good friend Mal Barsamian took me there and I got to visit the masters workshop and meet Peter for the first time. I remember it like it was yesterday. The shop was amazing. Ouds hanging from the ceiling, violins and other instruments he was repairing. Needless to say, I purchased the kanun and this became my first instrument – which I still have today. You don’t have to be an oud player to respect the work Peter has accomplished over the years. 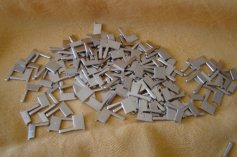 Mandals (metal levers) for a kanun

One day I found out that Peter had even tried his hands at making a kanun. I was starstruck at the thought of having a Kyvelos kanun. For many years, I would tease and “nudge” Peter about when he would make me one. His answer was always “When I find the right mandals, I will do it“. Mandals, or the levers, are the most integral part of a kanun and when I was just starting out to play, I never thought much about it. Over the years, the respect for Peter’s decision grew and it shows you the type of master he is. Sure, he could have made the most ornate, wonderful sounding, long-lasting kanun around – but he recognized that without the perfect set of mandals, the instrument would be worthless and it was not worth ruining the wood craftsmanship if the levers weren’t perfect and the sound wasn’t pristine. That’s Peter, a true professional.

Efcharistó Peter! – for all you have done over the years for all of us. You have made an impact on all of our lives, especially this kanun player.

This video clip features Mal Barsamian performing on one of Peter Kyvelo’s ouds that he made for my brother Keri back in the 1980s.

7 Responses to 165 Belmont Street, Home of the Oud Maker