As many of you know, music is not my full time occupation. I am happy that it is not and very fortunate that it permeates my life in the manner in which it does – when I want it to. The other evening music entered my life again, in form of a small rehearsal for an upcoming gig in Detroit.

Since music isn’t my occupation, my day starts normally very early and after a long day of

work and coming home, its easy to fall into la-la land from the long hours. (Having a couple of small kids helps you get there faster as well).

Rehearsal was well after the witching-hour for me and I was concerned about dozing off in the middle of a song. I fought to stay awake from the time I got home until the time I would need to go to rehearsal. Ironically, the moment I walked into rehearsal, there was no sign of fatigue. Completely vanished like being injected with a B-12 shot. It was great to see these musicians for a reunion of musicianship and songs we recorded several years ago. Music really can be the chicken soup for the soul. 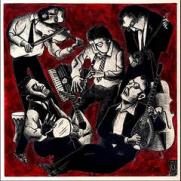 The friends that gathered were Ben Temkow, Doug Shimmin and Djeto Juncaj. These three musicians/friends have performed together for several decades, notably as the world music group The Immigrant Suns. Listen to their music on Spotify, they have been performing and composing world music in Detroit longer than most musicians.  I have had the good fortune to know these musicians for many years and we have played a wide variety of gigs together.

Last night’s rehearsal with Ben, Doug and myself made up for 90% of the group Eastern Winds. Mark Sawasky moved out of Detroit a few years back and certainly is missed. The addition of Djeto was a nice treat and fit in well.  It was great to revisit some songs I haven’t played in a long time like Realities and Erinaki.

The gig we were rehearsing is forthcoming and you can check out more information on Facebook very soon.

Time does fly, we recorded Eastern Winds over ten years ago. Seems like we didn’t miss a beat from those times. In the words of John Belushi, maybe its time to get the band back together.