“Personally, I feel that the most exciting aspect of my work – the great pleasure, in fact, that I receive – is the excitement and anticipation of beginning and doing. The end is defeat, the beginning is victory”.

These are the words once told to me by Kegham Tazian, an Armenian artist that has spent a lifetime painting and sculpting a vast world of modernistic and expressionistic art work. 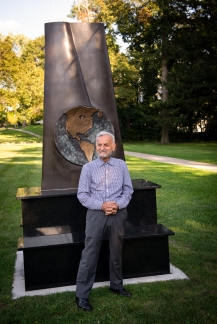 As a child, I knew him as a family friend first before recognizing him as an artist.  We lived in the same neighborhood for many years and frequently our families saw each other. When I was younger, I didn’t have a basis of understanding – Kegham: the artist. It’s because whenever I saw him, he was making jokes or doing impressions. To me, that was more of a fun loving man that I thought could entertain people. He didn’t seem to fit the stereotype I was familiar with of an artist. The suffering or starving artist image of Van Gogh or Jackson Pollack was not Kegham in my eyes. He was simply a happy and jovial man that is skilled artist and teacher.

It wasn’t until becoming older that I appreciated his artwork.  His work was unmistakable when you entered a corporate building or a  municipal campus. He constructed the bronze doors entering into St. Sarkis Armenian Church in Dearborn as well as some of the religious paintings inside the church. His work seemed to be everywhere. As a college student, I once had the opportunity to take one of his art classes (I am not sure I was his crowning achievement as I still can’t draw my way out of a crayon box!) and to this day, I am amazed at his teaching efforts. He made art fun and inspirational. Having spent over forty five years teaching art at Oakland Community College (OCC) as department chair and curator of the Smith Gallery on the Farmington Hills campus, he continued to create his own work and exhibit in art galleries around the globe. Eleven years ago, Kegham and his family established an endowment fund in his name to OCC students that “who have demonstrated a dedication to the arts and academic excellence”.

Kegham pictured with his children (Vatche, Taline, Vahe) at the ribbon cutting event.

In 1991, I wrote an article about Kegham for the Armenian Weekly. I recall spending the afternoon with him and asking questions about his process in creating artwork and he took the time to show me different pieces and what they meant to him. I reacquainted myself with that article and those fond memories came back to me as he showed me around his house which in itself was a studio of some of his finest works. I remember that at the time he was working with a new medium for creating artwork – digital. Experimental at the time, he wasn’t afraid to find new ways to express himself.  Always inventing, always creating.

Armenian born in 1938, Kegham came from a family of five children. His father died when he was quite young and his credits his mother for raising his siblings. Eventually coming to the United States in 1960, he settled in Michigan a few years later and has never left.

His accolades are numerous including both national and international awards. In recent years he was honored as an artist in Residence by the City of Farmington Hills. 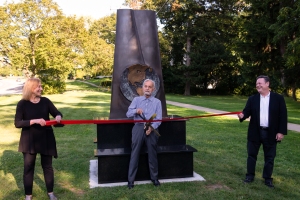 On September 10th, 83 year old Kegham was once again honored for his work. A 400-pound bronze sculpture was gifted to the City of Birmingham (his first residence upon entering Michigan) with support from the Cultural Council of Birmingham Bloomfield and the Hagopian family which is now on display in Linden Park.

The sculpture is called “Pyramid Earth” and was originally commissioned (in 1994) by TRW Automotive, in Sterling Heights, before Kegham was able to get it back due to the closure of the facility.  In 2013, the sculpture was installed at OCC’s Farmington Hills campus. Now it rests in a beautiful park for all to enjoy as it symbolizes the strength and fortitude of Mother Earth.

I’m proud to call this man my friend and wish him great health and happiness as he continues to receive the recognition he deserves for all of his achievements.