Over the past several months we have experienced many groups throughout the diaspora helping both raise awareness and funds due to the war in Artsakh. These groups have been innovative in putting together products or offering their talents to help support raise funding that will go towards humanitarian needs for all Armenians affected by the war.

We have seen many different industry sectors pull efforts together on these fronts. For example, the medical industry bonded together to pull medical supplies to send to Armenians in need. The arts and cultural world has also played a pivotal role from mainstream artists like Serj Tankian (who raised over $600k for Artsakh)  to actresses/performers like Cher and Kim Kardashian.

Now its the traditional/folk musicians turn to offer their talents to raise awareness and funds to aid Artsakh. 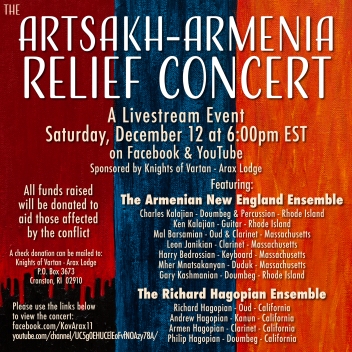 Charles Kalajian, a musician and educator, spearheaded the idea of creating a virtual concert featuring an impressive list of musicians from the East coast to West coast. This 90-minute concert will be on December 12, 2020 and can be viewed on Facebook and YouTube.

“My dad’s extensive career in music has inspired me to continue his teaching of the heritage and bond of music. Even though many who are performing in the concert are professionally trained musicians, we all learned Armenian music “knee to knee”, that is listening to each other, letting the music fill our souls which is how we created the concert. This concert was done with no rehearsal. There were COVID restrictions so to perform with those who had a chemistry was important for us to capture the spirit and emotion” said Charles Kalajian.

Certainly influenced by his father, Charles is immersed into the musical community. As an educator he is currently part of the music faculty of Rhode Island College, Community College of Rhode Island, Percussion faculty at the Rhode Island Philharmonic Music School. He has also launched Maestro Music Professionals (online music school) with his brother John Kalajian which is an online music school. “… bringing the joy of music to students goes beyond a job description. The way I carry myself is with passion and compassion and that carries that into my teaching. My students see how enthusiastic I am about what I do for a career, and it fuels their eagerness to learn” said Kalajian.

Charles’ father, veteran guitarist Ken Kalajian contacted fellow musicians, all of whom donated their time and talent to the creation of this livestream.

All funds raised will be donated to aid our brethren in Armenia and Artsakh affected by the war. I also want this concert to create awareness throughout the country so that people are not blinded or look away to what is happening. The point of history is to learn from our mistakes and make sure bad events do not happen again. If we just look away then we are again repeating our cultural history” said Kalajian.

“This concert is particularly more important because through our music we will be collecting money to help our sacred land Artsakh to blossom again” said Mher Mnatsakanyan. “Through the music of my duduk, I disconnect myself from this world and picture myself somewhere invisible while performing”.

Along with the musical program, the livestream highlights words of inspiration from the faithful clergy in Rhode Island as well as leaders from the Knights of Vartan. Sonya Taraian, host of the Armenian Radio Hour of Rhode Island will serve as host for the event as we create a cultural solidarity of identity and purpose.