A Musical Refuge for Ronnie Malley

In September, 2018, I had an opportunity to attend ArtsMidwest in Indianapolis. This was a large conference that featured different arts organizations, councils and artists from around the Midwest. As I was scanning the big expo hall filled with different artists and companies showing what they do for the potential of being hired, I couldn’t help but think how this was the perfect venue to promote world music. As I was half way through this hall I came upon Ronnie Malley, an exceptional world music artist that specializes performing the oud. We knew each other, but only through other musician friends and from watching each others videos online. We made such a great connection, it felt as if we were friends for several years. 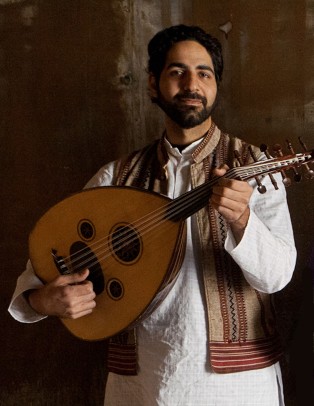 Oudist Ronnie Malley has been playing music since he was a young child. His influence is no doubt due to his father playing Middle Eastern music. He had a group called Golden Nights Band and Ronnie used to enjoy watching his dad and his friends on stage entertaining audiences.  So it should come to no surprise that at a young age Ronnie would be interested and influenced by his father to play music. His father formed a band that consisted of Ronnie and his brother.  Throughout the public school system, Ronnie performed percussion but at the age of nine, he started to take guitar lessons. It was natural for Ronnie, as a percussionist and guitarist to want to play rock n’ roll music, but his father wanted to make sure his son expanded his horizon on music and focused on Middle Eastern and North African traditional music. This important time in Ronnie’s musical exposure with his father helped him appreciate the music of Arab, Armenian, Assyrian, Indian, North African, Greek, and Turkish music. “I saw a place in music to pour my passion and angst. It really became an obsession learning songs, especially songs of my heritage” said Malley.

When Ronnie was a teenager, his father insisted that he pick up the keyboard as it would give their ensemble a competitive advantage in the market of performing Middle Eastern music in the community. However, this wasn’t satisfying to Ronnie and when he turned 16, the oud became his main instrument in his life. “I felt weird playing Mid-Eastern music on instruments made in Japan and felt like I had to take up an instrument from my heritage”.

In 1992, Ronnie with his brother and  famous Lebanese singer Tony Hanna after playing a show together.

Through his father and his father’s band, Ronnie learned invaluable lessons surrounding the modal system of Middle Eastern music. Makams, are sets of complex scales utilized in performing traditional Middle Eastern music. Trying to get a teenager that was listening to heavy metal rock in large amounts and at high large volume to appreciate the artistic traditions of Arabic music took a patient father. Ronnie recalls being allowed to play a cassette of heavy metal music in the car while riding with his dad. His dad listened to the entire album and appreciative of the fact that his son was a music enthusiast of any kind. However, when this heavy metal album was done, he put in a recording consisting of Abdel Halim Hafez, a legendary Egyptian singer, movie star and composer. Ronnie vividly recalls the song he heard was Mawood, and he was hooked to the music! “I remember hearing Omar Khorshid on guitar in the mix of a string orchestra, organ, qanoun, nay, and other Middle Eastern instruments. I wanted to consume anything and everything Egyptian and Levantine”.

My second meaningful musical experience happened five years later after hearing Abdel Halim Hafez. Serendipitously, it was a gig with Magdi Husseini, the keyboardist featured on Abdel Halim and Om Kalthoum’s albums. I was over the moon to think I was going to play with a legend who I listened to, and whose name I heard mentioned by Abdel Halim on live recordings. When the time can for the gig, the song he picked to feature was Mawood, the same piece that was my intro to Mid-Eastern music. During the concert, I played the guitar solo featured in the song and Magdi turned to me on stage and said, “Uh! Ya Ronnie Khorshid!” It was definitely a confidence boosting moment”.

Playing music can be compared to having a religious experience for Ronnie. “Music has long been a refuge for me from idleness and an outlet for my obsession with problem solving. Sometimes I wouldn’t leave my room for eight hours until I had down a piece of music I was working on. That practice paid off in the corporate world as well. It helped me learn to pay close attention to detail, be exacting, and learn how to pick up on patterns – skills useful in any profession. Today, I truly believe music is a way to speak in the absence of words. It is a spiritual practice that can bring people together and move them in ways that sometimes words cannot. I know every time I hit the stage, even as a kid, it was like a pulpit that had me sailing through the heavens”.

Preserving music has an important meaning to Ronnie and it speaks to his identity. “It helps us understand who we are, which can help us better explain to others who we are as well. Music and the arts in different global cultures are like their respective cuisines, they offer flavor, color, and can serve as a portal for learning about the richness of societies that can sometimes be ‘otherized.'”

Ronnie is again reminded of the contribution his father and his musicians made in shaping his philosophies and appreciation of music and life. “If it weren’t for my dad and his community of musical friends encouraging us to learn music, especially the music of my heritage, I wouldn’t be fluent in Arabic, I wouldn’t have played at Arab Christian churches (I grew up Muslim) to know the vastly diverse Mid-Eastern societies of various backgrounds and faiths, and more importantly, I wouldn’t have been as confident in my identity – Palestinian, Muslim, and Arab”.

No matter what you do in life, make sure you keep music as a part of it. Success is really determined on how much time one puts in. That includes time for practice, performing, and playing with others who are better than you because they will push to make you better. There are so many ways to work in the field of music, more than I imagined ever doing. I’ve had the opportunity to work as a studio session musician, composer for film and theater, accompanist, sound designer, theatrical performer, educator, and more. But even if one’s aspirations don’t take them into the professional world of music, it still has immense benefits. Music and art have an influence on a great deal of our cognition: how we speak, how we view the world, how we understand collaboration, attention to details, and having integrity in what we do. Art should never be viewed as an extra-curricular aspect to one’s life, but rather as an essential component to help with academic development, spiritual growth, and well-being.

Ronnie is a working musician with a diverse list of credits to his name. Most notably has been as a musician and consultant on Disney’s The Jungle Book (Goodman Theater, Huntington Theater).

In 2007, Ronnie, along with some fellow musicians, formed Intercultural Music Production which is a cultural arts organization committed to empowering a global community through performance, education, and production. Working with Middle Eastern and World Music artists, this organization has worked with children in the Chicago, Illinois and suburban school districts, local and national colleges and universities, consulates, intercultural/interfaith groups, as well as with international arts organizations and artists.

For more information about Ronnie and his music, please visit his website.

This entry was posted in Business of Music, Middle Eastern music, music. Bookmark the permalink.